The word “gospel” means good news. And biblical gospel refers to the good news according to the Holy Bible. If it is not scriptural, it is a counterfeit gospel. We need to shake that off at all costs. But what is this good news or biblical gospel? The short answer is Jesus Christ. And for its prospicient meaning, it is about Christ’s offer of salvation and eternal life by faith in His atoning blood at Calvary and His promise to the saved ones to live “where I am, there you may be also.” (John 14:3)

Let us discuss this topic in three points, which are:

What Does Not Constitute a Biblical Gospel?

If the teaching is about Jesus Christ PLUS SOMETHING to get salvation, then it is not a biblical gospel. It is like saying, you will get a piece of land through faith in Christ, but you will pay for the property with your GOOD WORKS. Mormonism is a good example. It “teaches that in order to attain salvation, believers should have faith in Christ, keep the commandments of the Mormon Church.” 1 It is the case of “faith in Christ PLUS SOMETHING.” It is bad news since no one is perfect. No one keeps a set of commandments 100 percent. (See 1 John 1:8.)

Another departure from the biblical Gospel is the Jehovah’s Witness’s teaching concerning man’s salvation from sin and hell. “JW’s believe that Jesus Christ’s death on the cross was to pay the penalty of Adam’s sin not the sins of all people. Once Adam’s original sin was taken care of it makes the opportunity for all people to be rewarded with eternal life for their faith and good works.” 2

This teaching is blasphemous because Christ died for all. “He died for all, so that they who live might no longer live for themselves, but for Him who died and rose again on their behalf.” (2 Cor. 5:15. See also 2 Cor 5:21.)

Second, the apostle Paul said, “For by grace you have been saved through faith; and that not of yourselves, it is the gift of God; not as a result of works, so that no one may boast.” (Eph. 2:8-9)

The Jehovah’s Witnesses, just like Mormonism and other cults, do not teach the biblical Gospel. Their teaching is Jesus Christ PLUS SOMETHING.

Why is Christ Jesus Himself the Gospel? 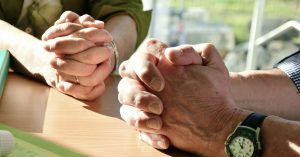 “And an angel of the Lord suddenly stood before them, and the glory of the Lord shone around them; and they were terribly frightened. But the angel said to them, ‘Do not be afraid; for behold, I bring you good news of great joy which will be for all the people; for today in the city of David there has been born for you a Savior, who is Christ the Lord.'” (Luke 2:9-11)

In Mark chapter one, John the Baptist baptized our Lord. Then the Holy Spirit and the Father manifested themselves. (cf. Mark 1:10-11) There was no mention of Christ’s ministry before that event. However, following His baptism, He invited a few men to become His disciples and preached the gospel while healing the sick and performing many other miracles. People got healed because of Jesus. As a result, Christ was the Good News to His audience as well as the communities that had heard about Him.

The Kingdom of God

After His baptism, Christ said, “The time is fulfilled, and the kingdom of God is at hand; repent and believe in the gospel.” What was that gospel mentioned, particularly by our Lord? It was about the kingdom of God. This kingdom is Christ’s kingdom on earth that will last forever, and only the saved ones, those partakers of the first resurrection (the Old Testament saints included), and the earthly people after the Millennium will enter this everlasting kingdom on the new earth. (See Isaiah 9:6-7.)

Note that when the new earth no longer needs the sun, “the nations [or the earthly people] will walk by its light [the light of God], and the kings of the earth will bring their glory into it.” (Rev. 21:24) There will be immortal people on earth after the Millennium. The resurrected saints (the partakers of the First Resurrection—the born-again Christians, the Old Testament saints, and the Christian martyrs during the Great Tribulation) will serve as administrators of Christ’s kingdom and will reign with him forever and ever. (cf. Rev. 22:5)

The Millennial Kingdom (1000 years) reign of Christ on the earth serves as a prelude to His eternal kingdom after the Millennium. That is why God will release the incarcerated Satan from his prison after a thousand years. (See Revelation 20:1-3.)

READ MORE: What Will Happen After the Millennium?

Without Christ, there could have been no everlasting kingdom on earth. Our Lord’s eternal government on earth qualifies born-again Christianity as a biblical group with mountains of gains and advantages in eternity. There are no other glad tidings bigger than the scriptural Gospel.

What Is This Promised Eternal Life, and What Does God Have in Store for Our Immortal Bodies?

The mere mention of our immortal bodies is good news in itself. Some believe that in our immortal state, we will sing praises to the Lord (see, for example, Revelation 15:2). But it’s more than that. Our life after death makes the Gospel immeasurably mind-blowing. Why? Because Christ said, “where I am, there you may be also.” Who can get close to Christ in the end? The born-again Christians and the partakers of the First Resurrection. That is why Paul said,

“[T]hat I may know Him and the power of His resurrection and the fellowship of His sufferings, being conformed to His death; in order that I may attain to the resurrection from the dead.” (Phil 3:10-11)

The Old Testament Saints and born-again Christians will be resurrected (the living ones changed and given a spiritual body) during Christ’s Second Coming. Then the Great Tribulation Christian martyrs will also be resurrected. All these saved ones will become first resurrection saints. And they will serve as priests and kings of Christ’s eternal kingdom on earth. They will live in the New Jerusalem, a square city, which is also the Throne of God, that will hover above the earth. And they won’t have any problem supervising Christ’s kingdom on the earth since Christ said, “where I am, there you may be also.”

The Prophet Isaiah once said: “Who are these who fly like a cloud And like the doves to their lattices?” (Is. 60:8)

What About the Earthly People After the Millennium?

The apostle John wrote in Revelation 21 (before he ended this prophetic book in chapter 22) that there will be people (not partakers of the First Resurrection) and these people will have kings (kings of the earth) “who will bring the glory and the honor of the nations into it.” Since there will be kings, there will be nations. And these post-millennial people will never die. Why will it happen? Because of Christ, who redeemed not just our souls but the physical universe as well, from the dominance of Satan.

Note the nations and kings mentioned by John, who will walk by the light of the City of God where the First Resurrection Saints live:

“I saw no temple in it, for the Lord God the Almighty and the Lamb are its temple. And the city has no need of the sun or of the moon to shine on it, for the glory of God has illumined it, and its lamp is the Lamb. The nations will walk by its light, and the kings of the earth will bring their glory into it. In the daytime (for there will be no night there) its gates will never be closed; and they will bring the glory and the honor of the nations into it; and nothing unclean, and no one who practices abomination and lying, shall ever come into it, but only those whose names are written in the Lamb’s book of life.” (Rev. 21:22-27)

The Christian Gospel is Greater Than We Think

The Christian Gospel is not only about our conversion and forgiveness from sin. It goes further to fulfill God’s enormous plan that includes the forgiveness of the soul and the redemption of the earth (or the universe ruled by the devil), the salvation of the Jews, the fulfillment of God’s promises, and the establishment of Christ’s everlasting kingdom on the earth. Without the Gospel that our Lord Jesus Christ offered to the world through His condescension, death, and resurrection, the devil would go unpunished, our future would be bleak and without a way to receive God’s forgiveness and reconciliation, and God would have a ton of empty promises.

But God demonstrates His own love toward us, in that while we were yet sinners, Christ died for us. Much more then, having now been justified by His blood, we shall be saved from the wrath of God through Him.” (Rom. 5:8-9)

The assurance of our salvation from God’s wrath in this life and after death is good news beyond the wattage of words. (See John 3:36.)

And this good news or gospel about our salvation, assurance of eternal life, our bodily resurrection, our involvement in Christ’s eternal government on earth, and so on, was made possible as a result of our scriptural faith in our Lord’s death, burial, and resurrection—also known as the biblical Gospel.

“Now I make known to you, brethren, the gospel which I preached to you, which also you received, in which also you stand, by which also you are saved, if you hold fast the word which I preached to you, unless you believed in vain. For I delivered to you as of first importance what I also received, that Christ died for our sins according to the Scriptures, and that He was buried, and that He was raised on the third day according to the Scriptures, and that He appeared to Cephas, then to the twelve. After that He appeared to more than five hundred brethren at one time.” (1 Cor. 15:1-6a)

All we need, Paul said, is to receive the gospel “by which also you are saved.”

What if a so-called Christian embraces another gospel? I knew of an old woman whose testimony during prayer meetings was something like, “before I did this or that, I prayed first.” After a year with our church, a Mormon elder hired her as the church’s cook, and she transferred to Mormonism without delay.

Anyone rejecting the biblical gospel is courting a spiritual tsunami. “But even if we, or an angel from heaven, should preach to you a gospel contrary to what we have preached to you, he is to be accursed!” (Gal. 1:6)